Is your manicure putting you at risk of skin cancer?

The connection between manicure UV and skin cancers or melanoma

Gel nails (also known as Shellac) are very popular these days. They give nails a beautiful, glossy finish – and they’re chip-resistant, so you can enjoy colourful, strong nails for several weeks. But did you know that gel nails also come with risks?

That’s because most nail salons use ultraviolet light to dry the polished nails. This has raised concerns amongst dermatologists because UV light (the same rays emitted by the sun and tanning beds), can damage the skin and cause skin cancer.

Manicures and skin cancer: is there a link?

Fears that the UV light used to dry Shellac or gel during manicures could cause cancer have been on the rise since a 2009 study reported that two women developed skin cancer on their hands after undergoing repeated manicures.

According to the report, however, more research is needed to determine a direct link between gel and Shellac manicures and skin cancer of the hands and fingers. One thing has been determined: UV light does increase your risk of developing skin cancer, according to the American Academy of Dermatology.

In a 2016 press release, board-certified dermatologist, Dr Chris Adigun, explained that the curing lamps used to dry Shellac and gel during standard manicures, does expose patients to these same types of UV rays. “The UV dose that you receive during a gel manicure is brief, but very intense,” she says. Further research indicates that the UV rays emitted by those lamps are four times stronger than the sun’s UV rays.

Above: Using gel or Shellac on your nails is relatively low but you should protect your hands from dangerous UV rays when possible.

On the other hand, researchers at Harvard Medical School who published a 2014 study found that the risk is minimal. The results showed that the level of UVA exposure associated with a gel manicure every two weeks was low enough to not significantly increase in skin cancer risk.

The Skin Cancer Foundation agreed in its 2015 report, stating that while ‘UVA rays, which have been linked to both premature skin aging and skin cancer, even the most intense of these devices presents only a moderate UV risk – a far lower risk than that presented by UV tanning beds.”

Protection is the best solution

While the risk of using gel or Shellac on your nails is relatively low, the Skin Cancer Foundation recommends protecting your hands from dangerous UV rays when possible. It’s a good idea to apply a broad-spectrum (UVA/UVB) sunscreen to your hands and fingers 20 minutes before having a manicure if you’re having gel or Shellac nails applied. You can also use fingertip gloves to help reduce your UV exposure risk (or ask your salon to supply them). Alternatively, look into other types of manicure that avoid UV lamps altogether.

You could also consider giving your nails a break from gel or Shellac over the winter months – which gives you a chance to notice any changes on or under the nails.

Nail melanoma isn’t common: but it is dangerous

Several different types of melanoma can develop on the hands and nails. Some can be seen on the top of the fingernail, while others develop underneath the nail. Despite a surge in publicity regarding nail melanoma, the risk remains relatively low compared to other types. According to the Journal of Foot and Ankle Research, only 1.4% of all diagnosed melanomas occur on the fingernails or toenails.1

However, that doesn’t mean you shouldn’t watch out for danger signs – Bob Marley died of a melanoma on his toenail at just 36 years of age! 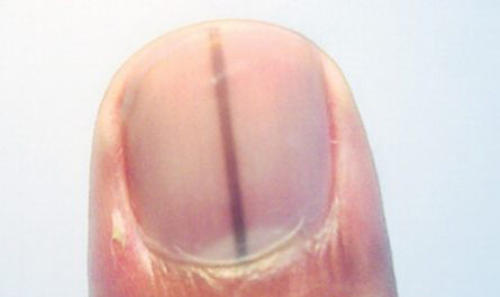 Left: Melanoma under a finger nail

Nail melanoma: what to watch out for

While relatively rare, cancer of the nails does happen, so it’s important to be aware of the early signs. These are some of the ‘red flags’ to watch out for:

Note: some of the above symptoms can also be signs of a nail fungal infection, so if you’re not sure check with your GP or a skin specialist as soon as possible.

We recommend a head-to-toe skin check, every year

As with any form of skin cancer, early detection is the key to avoiding melanoma – even before it’s visible to the naked eye. That’s why many people choose an annual Full Body MoleMap as it tracks changes in the skin to detect the early signs of melanoma – when its most treatable.

Get peace of mind knowing your skin has been thoroughly checked by an experienced team of skin cancer experts – from head to toe.